Eagle Rock Entertainment is set to release Come A Little Bit Closer – The Best Of Willy DeVille Live on May 24. The 17-track CD features material compiled from concerts in Amsterdam in 1977 and 2005, interspersed with other tracks from the Eighties, Nineties and into the new millennium from tour stops in the Netherlands, Montreux and Berlin.

“Singer/songwriter/guitarist DeVille(1950-2009) was a total original. He had no precedent…and there has been nobody like him since. Soaking up blues, doo-wop, R&B, Louisiana Swamp Rock, Cajun, Mexicali, Funky Soul and Cabaret into one dynamic all-encompassing eccentric vision of Americana (that ironically was beloved throughout Europe), DeVille thrived on a stage. His presence, his innate drama, his flair for the syncopated surprise, all made for an incredible concert experience. The set list is a dream line up of material from his days fronting Mink DeVille (1974-1986), and all the various eras of his musical life that took this man from San Francisco to New York City; from New Orleans to Paris; and from Memphis to Hollywood.
Included is the Academy Award-nominated song he wrote with Mark Knopfler for Rob Reiner’s The Princess Bride (‘Storybook Love’) as well as such signature songs as ‘Spanish Stroll,’ ‘Cadillac Walk,’ ‘Savoir Faire,’ ‘Mixed Up Shook Up Girl’ and ‘Hey Joe.’
Come A Little Bit Closer comes as close as a CD can come to approximating the vitality, the larger-than-life persona and the visceral throb of actually being in a Willy DeVille audience.” 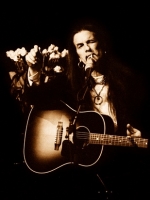