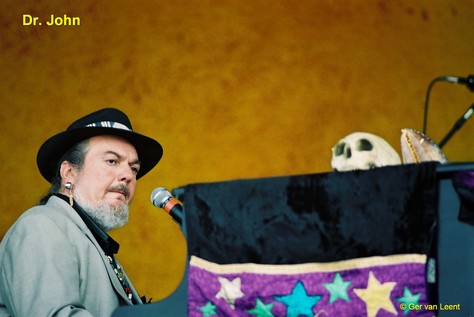 The family released the following statement:
Towards the break of day on June 6, 2019, iconic music legend Malcolm John Rebennack, Jr., professionally known as Dr. John, passed away of a heart attack.

The family released the following statement:
Towards the break of day on June 6, 2019, iconic music legend Malcolm John Rebennack, Jr., professionally known as Dr. John, passed away of a heart attack. As a Rock N Roll Hall of Fame inductee, six time Grammy winner, songwriter, composer, producer, and performer, he created a unique blend of music which carried his home town, New Orleans, at its’ heart, as it was always in his heart. The family thanks all whom have shared his unique musical journey, and requests privacy at this time. Memorial arrangements will be announced in due course.
In recent years, Dr. John became absent from public life, absent from stages including Jazz Fest, which he last played in 2017.
The incomparable pianist hailed from the Third Ward of New Orleans, where his six-decade career in music began. Along with Professor Longhair and James Booker, Dr. John is considered to be one of the city’s most influential piano players (and personalities). With 1968’s ATCO LP Gris-Gris, he launched his acclaimed solo career after working for years as a session musician. From the onset, he introduced himself as more than a virtuosic musician; he imbued his performances with voodoo themes, costumes and theatrical touches that made him a full-fledged character and adopted the Dr. John persona.
In 1973, Dr. John scored a Top Ten hit with “Right Place, Wrong Time,” off his sixth album, In the Right Place. Dr. John won his first GRAMMY in 1989, for “Makin’ Whoopee” with Rickie Lee Jones (Best Jazz Vocal Performance, Duo Or Group). Also in 1989, Dr. John spoke with OffBeat‘s Bunny Matthews.
At the time, he said, “I love the music–that’s the one thing I always love. That’s my fix in life. That’s my one healing maneuver that always works…We’ve got seriously spiritual music coming out of New Orleans. That’s one of the things that I think most people do not get out of what we do here. Just even the syncopation of the funk shit that comes out of New Orleans–it ain’t the same as what they get elsewhere. I mean, it connects but it ain’t the same because we all feel stuff from second line. It makes a huge difference and that one thing–people don’t get that. They not only don’t get it–they don’t want to get it. It’s too subtle for them, first off. They’re used to everything being in their face. The kids choose the hip-hop thing because they’re programmed groups.”
Throughout his recording career, he applied his touch to New Orleans classics like “Big Chief,” “Iko Iko” and “Tipitina.”
Big Chief   (with Prof. Longhair, Earl King and The Meters) https://www.youtube.com/watch?v=I09FChrTDJw
Back in 1992, OffBeat interviewed Dr. John who, at the time, was celebrating the release of Goin’ Back to New Orleans, an album which would eventually win the GRAMMY for Best Traditional Blues Album.
In 1999, Dr. John received OffBeat’s Best of the Beat Lifetime Achievement Award in Music and he graced the February 2000 cover of the magazine.
In 2011, Dr. John was inducted into the Rock and Roll Hall of Fame.
Malcolm John “Mac” Rebennack was 77.